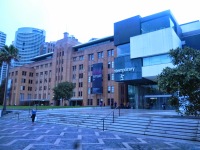 140 George St, The Rocks
Website: http://www.mca.com.au/
There is a certain building in Sydney that everybody visits, usually so they can get a photo of themselves standing in front of it, and even though I had an appointment at that particular building during my stay in Sydney, since it is an Australian icon I feel that I would simply be wasting my time saying anything about it because, well, everybody knows about it anyway. So, instead of going to that building, I decided that I would go and pay a visit to the Museum of Contemporary Art.
Over the years I have been developing an appreciation for visual art, even though I still find some aspects of modern art to be, well, strange (if not downright ludicrous). For instance, the first time I come here I walked into a room and it was completely empty with the exception of coloured gaff tape covering the floor (though there were a couple of dangly things hanging from the ceiling). When I exclaimed my surprise on Facebook, a friend of mine simply replied with ‘well, what did you expect?’. This is probably the best photo that I could get of this piece of, well, art:
My developing understanding of art has made me appreciate the writings of Karl Marx so much more, especially with his discussions on the ‘Estrangement of Labour‘. Whatever you think about his economic theories, I feel that he does have a point in this essay, namely that what industrialisation has done is to depersonalise art. The thing about art is that it can take many forms, though many of us understand art as simply being paintings, sculpture, and to a lesser extent, literature. However, before the industrial revolution, industry was personalised, meaning that when a blacksmith made something, there was a part of him going into that creation, and that is what art is, something that we create that we infuse a part of our personality into, whether it be a painting:
Sculpture:

This sculpture is much more exciting than Michealangelo’s other sculpture
or even a building;
whenever we create something we infuse a part of ourself into it and it becomes art.
The thing with modern art is it breaks the traditional boundaries of what we understand as art. Okay, we may all laugh about the artist who throws a handful of mud at a canvas, encases it in a frame and some glass, and proceeds to auction it off for a million dollars, but modern art, in a way, goes beyond that: like all art, a part of the artist’s soul is infused into the creation.
Seriously though, the paintings below simply seem to be little more than what I described above, especially all the artist appears to have done is get some white paint and paint lines across a black canvas:
and everytime I think about it I am simply not convinced that this particular artist put all that much time and effort into this creation. However, the fact that this painting is hanging in the gallery as opposed to my muddied piece of framed canvas suggests that this artist must have a reputation.
Still, there is more to the exhibitions in this gallery than simply silly paintings and sculptures that makes us scratch our head and ask ‘how did this ever land up here’. The first thing that I wish to touch upon is the nature of modern art. As I have said, modern art redefines the boundaries of what is accepted as art. Modern art is not confined to a piece of marble or to a canvas, but it can be the room itself, as we saw with the gaff tape room, and we see the same here:

It need not be a single object, but can a collection of objects:

And in some cases, the space can be a part of the art in as well:

Modern art is not limited to the static either, since when one wanders through a modern art gallery one will not only encounter creations that move (such as the collection of roladexes that randomly flip cards) but also video as art.
I couldn’t think of a better example of modern video art

As I have suggested, art is where the creator infuses a part of themselves into the creation, however I will suggest that collections can give us an idea of the nation from which these artists come from, and since this gallery is a collection of art created by Australians, I would like to suggest that this gallery gives us an idea of the Australia psyche. There are two aspects about our psyche that come to the fore in this museum: the guilt of our treatment of the aboriginals and our lack of identity as a culture.

Not surprisingly there are a lot of works here that bring out our relationship with the original inhabitants, and many of these pieces do not paint a pretty picture of our society. While the Marta room displays artwork produced by aboriginals from the Great Sandy Desert in Western Australia:
which come across as what one would expect from traditional aboriginal artists, there are other pieces of art that describe our colonisation of Australia as being little more than an invasion and subjugation of a native population, which is what this painting clearly expresses:
This is not the only artwork of that nature – there are more – however, what it portrays is a nation that is trying to reconcile the crimes of our past with the reality of the present. Mind you, the aboriginals are not the only peoples that have been wronged, as I saw in another room which was dedicated to the Muslim population. In reality, Australia’s history has always been a struggle to defend the White Anglo-Saxon culture against intrusions from other cultures, whether it be from Southern Europe, South-East Asia, or as we are seeing now, the Middle East.
That is the other thing that I noticed from this visit: how our modern art portrays the struggle with our attempts to define ourselves as a nation. While there may be things that we claim to be proudly Australian, such as the Kangaroo, the Koala, and the Didgeridoo, they don’t actually define our culture. This artwork captured that disjointed understanding perfectly:
The thing about modern art, though, is sometimes it can be difficult trying to work out what is art and what is not. However, this is modern art:

I almost threw my wrappers in here

while this is just a foot stool:

This work is licensed under a Creative Commons Attribution-NonCommercial-ShareAlike 4.0 International License. If you wish to use this work commercially please feel free to contact me.  All images on this post are © and/or ™ their relevant owners. If you are the owner of any of the images used on this website and wish them to be removed then please contact me.